The Story of Atari and Steve Jobs Breakout Video Game

The story of the Atari video game Breakout has no waste. It tells how Steve Jobs convinced Steve Wozniak to help him on the project and later paid him a small part of what he received for the work. Steve Jobs stayed most of it having agreed with Wozniak to give him half. 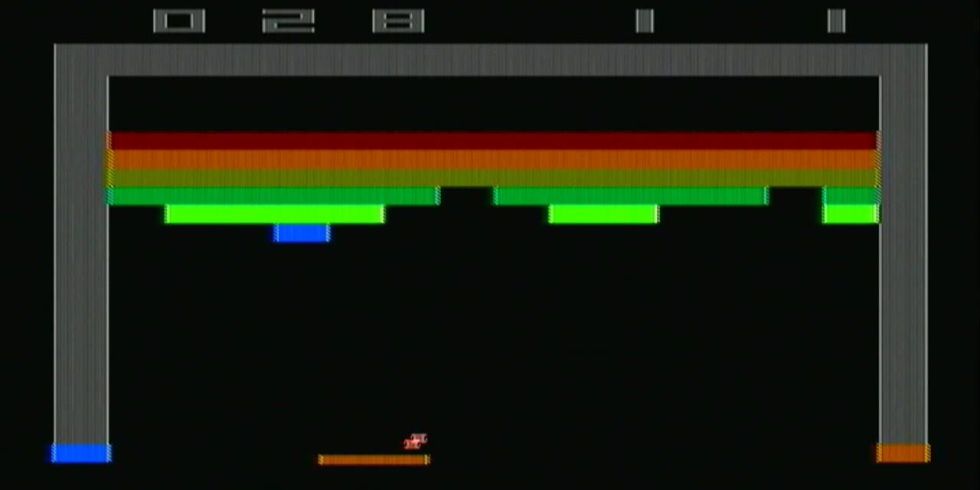 We tell you the whole story (we echo the great article by codigoespagueti.com / Sergio Hidalgo):

In 1975 Nolan Bushnell, the founder of Atari and creator of the celeb Pong, he realized that his game was no longer popular in arcade venues. So he commissioned Steve Bristow, Atari's star programmer, to design a new game with a single premise: make a Pong for single player.

Bristow, head of Atari's creative department, had gained fame programming hits like Pong Doubles, Quadrapong (two more complicated versions of Pong), as well as the most successful Tank, one of Atari's biggest hits in the seventies, and Indy 800, one of the first racing games. With the Bushnell idea in mind, he designed the concept of Breakout using the structure and gameplay of Pong, copying the racket and ball concept, but aiming to destroy a "wall" formed by rectangular lines located at the top of the screen, which returned the ball and allowed a single player to have fun.

To program the game Bristow chose Al Alcorn, one of Bushnell's assistants in developing Pong. While Alcorn was in charge of the project, the development of Breakout It went slowly, trying to cut down on the use of chips to make it more affordable and profitable.

For his part, Nolan Bushnell had little that he had hired a young hippie "who was constantly concerned with proving that he was the smartest in the company" and collecting money to get to India on an initiation trip, which did not fall Almost nobody in Atari is good, but Bushnell is. It was a very young Steve Jobs, a temperamental, little neat and troublesome new talent from Atari. The future co-founder of Apple had already demonstrated his talent as an assistant in the programming of Video Basketball, a game for which he was paid $ 5 an hour.

After returning from his trip to India, Jobs arrived in Atari seeking to increase his income. Thus, he learned that Alcorn had already delivered a first version of Breakout, but with the drawback of using too many TTL integrated circuits, which made arcades more expensive. Jobs appeared before Nolan Bushnell and told him that he could reprogram the game and make its production cheaper.

Emboldened, Jobs indicated that he could have the entire game scheduled in just 4 days. Bushnell and Bristow, who doubted the young man's ability, offered him a payment of $ 750 - far more than the fledgling programmer had earned so far. and a $ 100 incentive for each TTL IC that it was able to remove from the original design.

Jobs knew that his programmer skills weren't enough to accomplish the task, so he immediately sought out his friend Steve Wozniak, who was then an HP employee and had previously hobbyized his own version of Pong, to offer you half the money they would pay you for the job. Woz saw the programming of Breakout as a challenge, and he met the deadline after working without sleep for three days. Wozniak delivered the game including many ideas of his own, such as placing the point marker on top, as well as managing to remove 5th chips in the final version, ending the game with just 42 integrated circuits. Steve Jobs received a $ 5,000 bonus from Atari, but, as it turned out later, he concealed the deal from Wozniak, paying him only $ 375 for all the work..

“I would gladly have designed the game for Atari for free, just for having the honor to do so. For me Atari was one of the most important companies in the history of technology, and it was an honor to be close to them at the time. I saw them, in the business of arcade games, as now young programmers see Microsoft, "he said Steve Wozniak in the nineties.

Ultimately, Atari did not use Wozniak's design because, although they thought it was very good, it did not fit Atari's production line. So they had to redo it, keeping most of Woz's ideas to be able to mass-manufacture it. The final version used more than 100 integrated circuits, demonstrating the impressive talents of the Apple co-founder. In recent interviews, Wozniak has mentioned that the real reason behind not using his version of Breakout was that the Atari engineers did not understand its design. He also told how he found out that Jobs did not give him half the payment for programming Breakout:

“I was on a plane to promote the Mac, I was sitting with Andy Hertzfeld [another Apple developer] who told me that he had just read Zap !, a book about the history of Atari. Hertzfeld was very impressed as he had read that Steve Jobs had designed Breakout. I explained to him that we actually both worked together to develop the game, and that we had been paid $ 700 to do it. Andy corrected me: 'No, in the book it says it was $ 5,000.' Shortly after, I bought the book, and when I read how Nolan Bushnell narrated that he had paid Steve a $ 5,000 bonus, he couldn't stop crying, "Woz said.

With the money obtained from the development of BreakoutSteve Jobs was able to start financing Apple. Even grateful to Nolan Bushnell, he offered Atari's honcho to be partners in the project, but Bushnell was not interested in the hippie Jobs project.

“Steve asked me if I would put $ 50,000 in exchange for a third of Apple. I was so smart that I said no. It's almost funny when I think about it now, except when I'm crying, ”Bushnell recalled a few years ago.

Wozniak also used everything learned in the development of one of his future projects: the Apple II. The idea for a color graphics scheme came directly from the ideas Woz developed when looking for how to program the colors of the game, which also served to shape the color structure of the company logo, the focus on the software also comes of that time.

Have you played one of your many versions?