My ZX Spectrum and I

It all started when my father bought us the ZX Spectrum wonderful 16Kb. 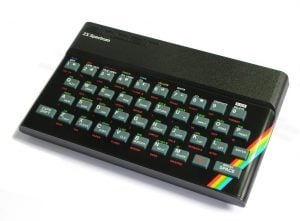 I perfectly remember the games it came with: The Horizons (which was more like a demo of Sinclair) and Mineroloco. Many hours of intense play I stuck together with my sister until we learned to ride the wagon. Achievement unlocked!! Then, in the absence of games, we began to copy the programs that came in the Micromanía or any other magazine of Spectrum. She dictated and I typed. After a whole afternoon of work, finally the reward! That Snake seemed wonderful after so much trial and error.

I also remember the great "Horacio skier", a mix of ski games and the Frogger (when you were hit by a car an ambulance came) followed by the version of "Horacio hungriento", although I must admit that I liked the former more.

After this, my father directly bought us the ZX Spectrum +2, with its integrated tape loader. ¡¡¡Tape Loader!!. A true wonder. Fantastic moments with my sister playing Bruce Lee as a team. She took Bruce and I to the fat bad guy with whom she beat the other bad dwarf on the stick so that she would make the screen.

I would not change the afternoons with my friends enjoying classics like Green Beret, School Daze, Renegade, Freddy Hardest and many others. The load of games was an excuse to talk about our things, although there were times when we despaired. Alcohol swab to clean the heads, leave the cassette button pressed, touch the tape screw ... There were so many techniques to make it work that in the end you became an expert. I remember once it took me a lot to load a game and my friend hit the reset button after a game… OMG !!! go pissed off that afternoon.

I think the Green Beret is one of the games that I spent the most hours on. So much time spent to see that the final screen WAS THE SAME AS THE FIRST! What a disappointment, half a life lost for nothing. But hey, proud to have completed the challenge :).

The truth is that I really miss afternoon afternoons with friends watching that devilish screen load. The same thing one of these days I organize a meeting to remember old times and have an excuse to have a coffee.